From Wikipedia, the free encyclopedia

Jump to: navigation, search
This article is about the computer term. For the TBN game show, see Virtual Memory (game show). 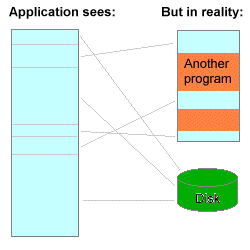 The program thinks it has a large range of contiguous addresses; but in reality the parts it is currently using are scattered around RAM, and the inactive parts are saved in a disk file.

Virtual memory is a computer system technique which gives an application program the impression that it has contiguous working memory, while in fact may be physically fragmented and may even overflow on to disk storage. Systems that use this technique make programming of large applications easier and use real physical memory (e.g. RAM) more efficiently than those without virtual memory.

Note that "virtual memory" is not just "using disk space to extend physical memory size". Extending memory is a normal consequence of using virtual memory techniques, but can be done by other means such as overlays or swapping programs and their data completely out to disk while they are inactive. The definition of "virtual memory" is based on tricking programs into thinking they are using large blocks of contiguous addresses.

This article was originally based on material from the Free On-line Dictionary of Computing, which is licensed under the GFDL.